We are live aboard boaters.

We want you to know that we love this life we have chosen. This means that our only permanent home is a boat. Living aboard a boat is a time honoured tradition on our coast.  Sometimes we are cruising the coast of British Columbia. At other times we may be anchored in a safe harbour or tied up to a marina. One of the real pluses of our chosen lifestyle is that we can choose where we want to live, and if we decide to move, all we have to do is untie the lines or pull up the anchor and go. It’s all about freedom, a thing many talk about but fewer find.

There are other things that attract us to the life of a live aboard boater. We live in close proximity to nature. Often, our neighbours are seals, otters, mink, seagulls, Blue Herons, Kingfishers, and a variety of fish. Our human neighbours are fellow boaters from all over the world. On a marina dock, we learn to live close to each other where the skills of both being a friend and at the same time giving each other the space needed for privacy are essential. This sense of community among live aboard boaters is the memory most cherished by many of those who have moved back to shore. Living aboard a boat is also a way to simplify one’s life and have a smaller impact on the environment using less of our increasingly scarce resources. We have been able to give up the use of an automobile and rely on our feet or public transportation. Because we spend the winter docked in downtown Victoria, most of the amenities we need are either a short walk or bus ride away.

Very often we are told by people living in traditional life situations ashore, that we are living a secret dream they have had for years. Our response is always, “If you really want to do this then just go for it!” Lynn and Larry Pardey, famous world cruisers said, “Go simple and go now.” However, careful consideration is needed before making this choice; it’s not for everyone. For instance, if you are married, it is essential that you both share the same dream. (And there’s little hope for avid gardeners!)

We are writing this article because we believe that it is important for you to have an accurate account of what the live aboard life represents. Often in the media, people who live aboard and the boats they live in are presented in a negative light. A recent piece in the National Post had a large headline with the words “shanty town” and “derelict boats”. However, there were no pictures of either in the article. Many municipalities have a fear of live aboard boats due to these misconceptions, so we would like to present you with some facts to counter the prevalent myths about live aboard boats and their crews.

Myth number one: Live aboard boaters are trying to live under the radar

Live aboard boats and the people who own them are fully in the public eye. Many marinas where they live are either open to the public or, if gated, very visible from the shoreline. Here in Victoria Harbour, the boats are a tourist attraction, with many visitors coming by, taking pictures and asking questions. The live aboard boats are a large part of the ambience of the harbour.

There are a number of families with children living aboard, and we all know, you can’t hide children. Live aboard boaters do not wish or choose to be hiding from the communities in which they live. If they are pushed into a position of feeling they have to hide, it is only due to the kind of prejudice and lack of real knowledge and understanding that so often afflicts  minority communities.

Myth number two: Live aboard boaters do not pay taxes

Anyone living aboard would prefer to be securely tied up to a dock in the winter months when they are not cruising.  Anchoring out in a harbour in the winter is a choice some are forced into when marina space is either not available or unaffordable. Live aboard boats rent the dock space they occupy in a marina from the marina operator. Live aboard boaters pay all municipal and provincial taxes through the moorage fees assessed by the marina in which they live, in the same manner that would be applied to anyone on shore living in rental accommodation. If one sees live aboard boats occupying an anchorage in the winter, ask if the adjacent marina offers live aboard moorage at a reasonable rate. Most often the answer is that the marina operator does not or is hampered in this by local by-laws restricting live aboard moorage. Too bad, because, as you will see below, they are giving up a lucrative revenue source. This fact becomes even more unreasonable when the same marina offers sequential moorage to people living on boats all summer long in the same location.

Myth number three: Live aboard boaters are unemployed (a reason recently given by Port Hardy city council to evict live aboard boats from the harbour)

Most live aboard boaters are either employed in the community (that’s why they need moorage adjacent to their jobs) or are retired from a work career. In my observation, most live aboard boaters are in their mid sixties and have lived aboard for more than seven years. In our community we have former military people, university professors, landscapers, retail staff, electronics engineers, mothers & fathers, computer programmers. A number of them are self employed and work from their boats,  …. you get the picture. 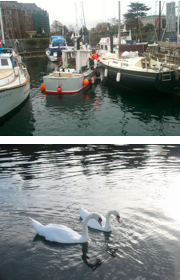 Myth number four: live aboard boaters pump their poop and other pollutants into the harbour.

Federal laws prohibit the pumping of toilet waste (black water) and solvents ( oil, fuel, etc) into marine environments. Boats with marine toilets (heads) now have holding tanks for these wastes and most marinas provide services to promote clean harbour living such as holding tank pump-out, or they have shore side washroom facilities. The Greater Victoria Harbour Authority has a publicly available pump-out station located at Fisherman’s Wharf. The GVHA also provides its live aboard customers with a mobile pump out service at the boat, once a week. This service is paid for by all boaters using their facilities as a portion of their moorage fees. 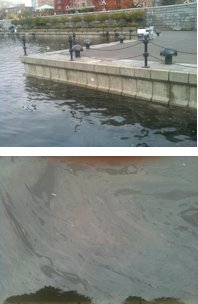 Very often, pollution in the harbour comes from shore. Oil slicks on the inner harbour water and fertilizer run off come from municipal storm drains; plastic bottles, plastic bags and coffee cups are thrown from shore. And the worst pollutant, cigarette butts, come from thoughtless smokers of all stripes.

We live aboard boaters choose to live in this beautiful aquatic environment and none of us wants to see it polluted in any way.

Live aboard boats have a very small environmental footprint. Many occupy less that 400 square feet. They get by on 30 amps of electrical power for all lighting, heating, and cooking needs. That’s less than a homeowner on shore uses to cook dinner on an electric range. Two people living on their boat will only use about 50 gallons of fresh water in a week. We have no lawns to water. A number of us do not own automobiles and make frequent use of public transit.

Myth number five: most live aboard boats are derelict

Most live aboard boats are not derelict. Just like a house on shore, to be able to comfortably live aboard a boat, it must be maintained and kept in good condition. Also like landowners, we take pride in our homes and spend a great deal of time and money on maintenance.

Often, to be allowed to moor, insurance is required. Boat insurance is more costly than house insurance and requires rigorous regular inspections to qualify.  Many boats that appear to be derelict are, in fact, not lived aboard, but are abandoned by their owners.  Owners of run down boats like run down houses onshore, are an individual problem that needs to be dealt with on an individual basis. The same thing goes for anyone putting pollution into the harbour; deal with the individual committing the offence. Do not punish all for the bad behaviour of a few.

Myth number six: People living on boats are not contributing members of the community

There are almost two hundred live aboard boats in Victoria Harbour, and we are very much contributing members of our community. Our moorage and associated fees alone contribute  over $1,100,000.00, to the local economy. Added to this is the money spent (locally) on groceries, clothing, maintenance, services, entertainment, education and a host of other expenses.

Live aboard boaters also contribute to the community through volunteer work, they sit on the boards of local service organizations providing community involvement, and they contribute to the economy through their jobs. One man, living on his boat in Esquimalt, is a Provincial Emergency Coordinator, providing amateur radio services during an emergency. All live aboard boaters have VHF radios on their boats and would be able to provide communication services in the event of an emergency.  They are also the eyes and ears at the marinas where they live, preventing theft and damage to facilities and unattended boats. At Fisherman’s Wharf and the Causeway Docks in the inner harbour, we are tourist attractions contributing to the beautiful ambiance of Victoria Harbour. Can you imagine how many of us there are in photographs of Victoria shown around the world?

So, there you have it from our perspective, living on the water. We laugh, love and feel just like all others, and we are a part of our community. Next time you are in the harbour, stop by and say hi.

1 thought on “Some Truths about Live Aboards”