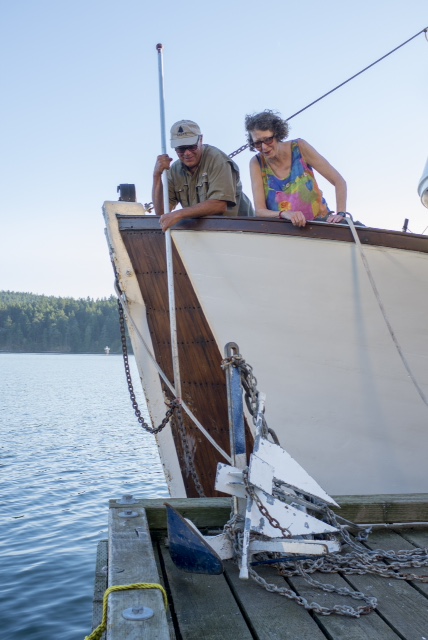 Jude and Rick have owned and cruised Julie May for the past eight years. Prior to that, they lived in a float house on Quadra Island and Rick owned and sailed a Cal 25 for thirty years.

Have you ever had one of those series of related events that make you wonder if the gods are playing with you for their own amusement? You may know the type of experiences I’m referring to where something that usually never happens to you starts occurring over and over again.

Jude and I had been planning to spend an extended period of weeks going for a long cruise in Julie May, our 42′ converted trawler. Julie May is a 47 year old ex fish boat with lots of water under keel. When out cruising, we both prefer to be at anchor in some quiet beautiful bay for an evening rather than tied up to a marina dock. In all those years we have experienced very few, totally inconsequential, anchoring difficulties.

Well, this year we began our cruise around mid July, having spent the previous number of months babysitting our grandchild Cade two days a week while tied to his parents’ dock on Piers Island. Now we were underway. In the past ten days we have been severely challenged with four serious anchoring problems. After each one has been resolved, I keep saying to myself, “Glad that’s over. Now let’s get on with things.”  Famous last words. I think I will abandon that phrase. It’s seems to be mocking me.

Our first problematic anchoring experience actually occurred before our cruise even got underway. Having to anchor Julie May for the day due to an appointment in Victoria, I put the hook down off the Swartz Bay government dock in exactly the same location where I had anchored a few nights before. Planning then to spend the night with Cade and his family on Piers Island, I began to raise our good old Northhill from the 10 meters of water where she had held me the previous night. With 75 ft of chain out, the anchor came up beautifully, but, stopped the winch dead with 25 ft remaining. Try as I might, she was stuck fast. Hung up on something.

Saying a thank you to the creators of cell phones and the Internet, I was able to summon Cold Water Divers from Tsehum Harbour who arrived in 30 minutes. Two divers, a boat operator, 40 minutes and $336 later the Northill was freed from its figure 8 wrap around a cable. The divers could not see what that cable was attached to. An old mooring? Logging derbies? Piers Island power and water? Who knows. I was just glad to be free.  Said to myself, “Boy, glad that’s over. Now we can get on with things.”

A few days later after some great family time with both grandchildren, we left for Pender Island. After a pleasant couple of days anchored next to Lazy Bones II visiting Tim & Denise in Port Browning, we headed north anchoring at Kendrick Island in Gabrolia Pass. We tucked down well into the bay beyond the yacht club docks to get out of as much of the westerly wind as possible. It’s quite deep along the east side of the bay with a drying reef protecting the anchorage from the Strait of Georgia. It was pretty windy that night and Julie May moved around quite a bit, her anchor chain thumpIng and groaning most of the night. While we had anchored rather close to shore, the next morning revealed that we were uncomfortably close to that reef. So, what to do? Pull the anchor of course and head for someplace else. And up comes the chain only to stop with a clunk before all was rolled up on the winch. Looking down from the bow, I was greeted with the sight of a jumbled tangle of 3/8″ chain wrapped around the flukes of the Northill, which was hanging upside down. Damn. While Jude slowly navigated Julie May around the bay, I hung over the bow with my 8′ pike pole trying to untangle the (very heavy) mess. I was able to get all but the last wrap untangled when Jude made the wise observation that we could tie up to the (private property, no trespassing) unoccupied yacht club dock, pull the anchor up on it and finish the job. We did that and motored off to a very crowded Silva Bay where we again put the hook down in a mud and sand bottom to wait out the howling westerly wind, me thinking, “Boy, glad that’s done. Now we can get on with it.” Famous last words.

The next day the westerly winds were to die down to a reasonable 10-15 knots so we (really Rick) thought we could continue north towards our next goal, Jedediah Island. It seemed like a good idea, with area WG non operational that day, we would cut off five miles of the trip. What we encountered were 4′ swells and four hours of spray over the bow. The last hour was relatively comfortable as the swells gave way to a moderate chop. We discovered our favourite one boat anchorage, Codfish Bay, with three boats already in it. Exploring the east side of Jedediah, nothing seemed well enough protected from the continuing westerly winds. So, we moved across to Boho Bay on Lasqueti island, well protected from the westerly and a preferred anchorage for larger boats. We had anchored there before. By nightfall there were about nine boats in the bay with a 58′ classic sailboat next to us and a smaller trawler upwind. The wind was blowing enough that at 3:30am I got up to lower the hatch over our bed. Looking forward, there was that other trawler about 15′ from our bow. Obviously, her anchor was dragging. And the 58′ classic sailboat was close enough to us that I was forced to put out fenders along our starboard side. Shining a bright flashlight and tooting our horn, I was able to rouse the crew of the trawler who quickly dealt with their boat. After some deliberation and polite conversation with the captain of the sailboat, he pulled up and re anchored further away from us. Whew, I said, “Glad that’s over. Now we can get on with it.” Famous last words. I’ll never say them again!

Having gone back to sleep with the wind still westerly, we woke up at 8:00am. The wind had shifted, as predicted, to the southeast which was to blow about 10-20 knots. Time to move to a more protected location. No problem. Just pull the anchor and go. Right? We had been held well all night. Hadn’t budged. So, engage the winch. Haul in 200′ (it’s deep in Boho Bay) of 3/8 chain. Up she comes. 150′. 100′. 75′. Clunk! Winch abruptly  and prematurely stops with 50′ of 3/8 chain and a heavy Northill anchor hanging down. I look over the bow. Sorry, I really do wish I had been able to take a picture. Because there was an anchor. Not my anchor. Somebody else’s anchor (a big Danforth). And attached to it was (I measured later) 35′ of 5/16 chain and about 15′ of nylon rode. I told Jude later that it looked like week old spaghetti hanging down and wrapped around it all was, you guessed it, my wonderful 3/8″ galvanized chain. Below this mess was another 50′ of my chain and the Northill. Kinda heavy. Damn. Once again, Jude piloted Julie May at a snails pace into a 15 knot SE sea while I hung over the bow, trusty pike pole in hand and attempted to unravel this mess. Using two other lines to hold the Danforth in place and easing the tension on my anchor chain I was able to start unwrapping all that 5/16″ chain. Finally got it off and laying on deck, I now had to unwrap my chain from the Danforth.  And keep my fingers and arm out of any bite that the chain might create. Unwinding my chain, there was one final big slip and it was free of the Danforth. No fingers or arms involved. Only problem left was that my 50′ of chain and anchor was now pinching one of the lines I had holding up the Danforth. The solution was obvious, and much as I hate to sacrifice a line, I cut it. Now everything was free. Haul the Danforth on board. Use the winch to raise my chain and anchor and all is well. Again.